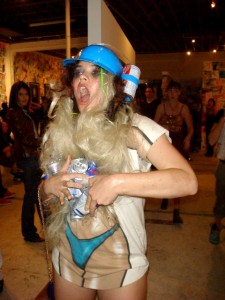 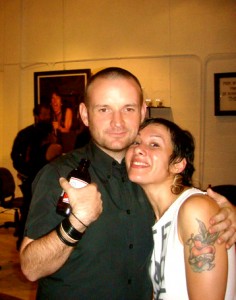 Kill Your Idols Art Basel Miami. This weekend was an absolute blast full of art, music,partying and a very small hot tub full of punks.  Bryan, Cory and Darren with the help of Timmy Hefner put on an amazing 4 nights of shows.  The space was plastered in old punk flyers and amazing huge photos taken by Eileen Polk. Free beer and vodka cocktails set the mood. And the bands absolutely killed it every night, jamming the place full of kids going crazy! Reigning Sound was the highlight for me.  Amazing!  Logan and I gave out free Converse out of a truck to a swarming crowd of drunken maniacs. My favorites were the sweet John Varvatos converse Bryan and Cory had on. They are awesome! I spent my time concocting different vodka cocktails and forcing a stressed Bryan to drink them! Peer pressure, its my speciality! I was lucky enough to be a guest at the huge house the dudes in charge rented for everyone to stay in. It was totally packed with people shoved in every corner, tucked in every closet and camped out around the pool. Every night after the show we had giant messy drunken pool parties. And yes Mad Dog 20/20 was consumed.  All in all the week was success filled with new friends and fun memories.

Kill Your Idols Philadelphia. I was stoked to hang out with Bryan and Cory again after becoming buddies with them in Miami. They asked me to help them out with a Black Flag  boombox battle for the show at Juanita and Juan’s. I was more than happy to help and grabbed three friends to join me. We used old school boomboxes that Bryan had spray painted the Black Flag bars on. Our job was to run around one by one blasting Black Flag all over outside, inside, under tables and in everyones ears! They were a hit and were scooped up by people almost instanly! This show was strictly Black Flag themed with tons of old flyers framed on the wall.  My favorites were the ones by Raymond Pettibon.  Even in the freezing weather the show was packed. Wine and whisky (bad combo btw) warmed everyone up. Later on Cage performed.  I wanted my new friends and mentors to have fun in my city so after the show I took them for their obligatory Philly cheesesteaks in South Philly and then to the Pope for some cocktails.  I don’t know about everyone else, but I proceded to get very wasted.  This resulted in alot of photo taking and an impromptu late night dance party at the hotel.

Kill Your Idols SXSW Austin.   I wonder what hijinks and craziness will insue? The shows will be free and going on all day Friday at Club 1808.  Later that night is the bridge show with Annihilation Time, Vivian Girls and Trash Talk. I’m super excited for this!  If you’ve never been to bridge show in Austin you have missed out and most definitely have to be at this one.  It’s like an after hours party outside in the city on a bridge! You can be as loud and as drunk as you want and everyone gets in!   See you there!  I’ll be the one in charge of fun! xoxo, 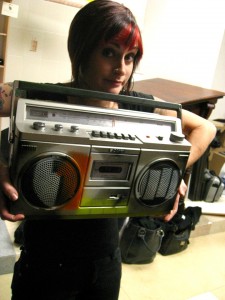 One Reply to “TONI B”